The gods play with our fates like pieces on a chess board. Our freedom comes only from facing our challenges and winning. This is the heroic world view at the heart of Jason and the Argonauts, the film that could be considered Ray Harryhausen’s masterpiece. 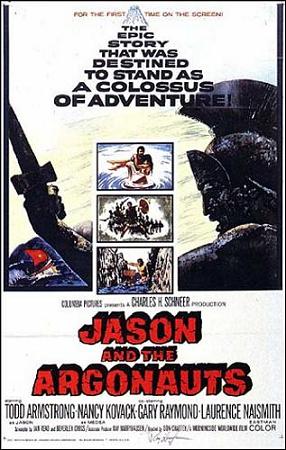 Plot of the film

Pelias usurps the throne of King Aristo killing all the Royal Family except for the King’s son, Jason, who it is prophesied will kill Aristo one day. Jason is taken away during the looting of the palace at the connivance of the gods. Hera has put Jason under her own special protection.

Twenty years later Jason (now a man) saves Pelias from drowning.  When Pelias realises who Jason is he sets him off on an impossible mission to the ends of the world to get the fabled Golden Fleece.

Jason selects a band of the best fighters in Greece, commissions a ship and sets off on what will be one hell of a trip.

The film is largely a wholesome adventure. After days at sea, the Argonauts remain clean shaven and although their bodies shine from their exertion of sweat, they elude a lack of seediness. Although Jason is surrounded with prime examples of (white) masculinity at its peak, he stays purely focused on the Golden Fleece.

Anxieties of the age

The film was released in 1963. A transitional year for the USA. Are the anxieties of the age transferred to the film?

The first battle takes place on the Isle of Bronze. Heracles steals a giant golden pin from a treasure trove and wakens the colossal bronze statue of Talos. The clunky mechanical beast is perfectly rendered by the special effects, suggesting an early steam powered automaton. The battle ends, as it obviously would with Talos killed.

It is hard not to compare this section of the film with the scenes of island hopping battles with American intervention in the Pacific during World War II. Perhaps this draws on the many popular films of the period. PT 109, the fictionalised account of Lieut, John F Kennedy  was released in the same year as Jason.

There is an ambiguity in this scene. It is the first battle, where Jason has to prove himself. Yet the action is set off by the greed of the Argonauts. If Heracles had not stolen the pin, Talos would not have had to defend his island and be killed.

In the next challenge, the argonauts intervene in the punishment of Phineus. The blind seer is tormented by harpies. The argonauts use their manpower to capture and incarcerate the harpies and put Phineas in charge of them and the Island. In return, Phineas gives Jason advice.

Jason’s intervention is presumed ethically good. That it provides Jason an intangible good, in the form of advice, is an afterthought. The same well intentioned but essentially pragmatic program was promised by Kennedy in his inaugural speech.

we offer a special pledge–to convert our good words into good deeds–in a new alliance for progress–to assist free men and free governments in casting off the chains of poverty […] let every other power know that this Hemisphere intends to remain the master of its own house.

The year of the film’s release ended with the assassination of the President and was followed by Lyndon Johnson’s escalation of American involvement in Vietnam set in train largely by Kennedy.

The skeleton army raised by Aeetes, who come from nowhere are almost a precursor for the guerrilla tactics of the Vietcong. 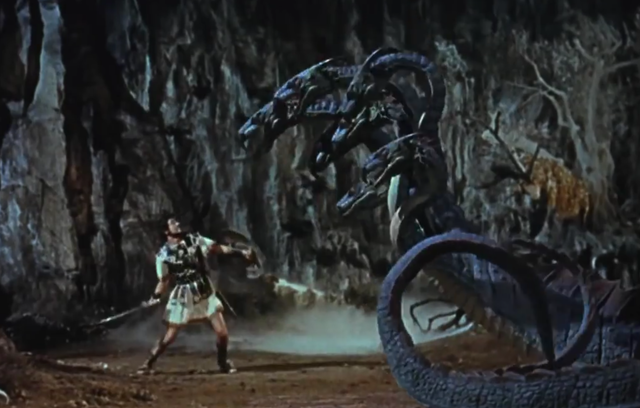 This is perhaps too close a reading. What raises the film above standard fantasy fare or patriotic drivel of the period are the special effects.

The skeleton soliders, move like skeletons – light on their feet and skittish. The hydra’s uncoordinated lunges are slippery and louche, like a snake, the stuff of nightmares.

There are differences between the film and the myth. There is essentially one version of the myth, the Argonautica by Apollonius of Rhodes which dates from the early Hellenistic period. During this time, Greek scholars in Alexandria, collected, codified and edited earlier texts such as Homer, Pindar and Hesiod.

Other versions of the myth of Jason can be gleaned from these earlier texts.

In the Odyssey, the witch Circe warns Odyseus of the dangers facing him and says:

One seafaring ship alone has passed thereby, [70] that Argo famed of all, on her voyage from Aeetes, and even her the wave would speedily have dashed there against the great crags, had not Here sent her through, for that Jason was dear to her.
Odyssey 12.36

Jason is also mentioned several times in the Iliad.

Hesiod gives another account. Jason is the son of Aeson. He is set “many grevious labours” by Pelias. When he finished them he sailed to Ioclus with the daughter of Aeetes.

The poet Pindar also told about the tale of Jason in the Fourth Pythian Ode:

When the choicest seamen came down to Iolcus, Jason reviewed and praised them all […] Jason killed the gray-eyed serpent with its dappled back by cunning, [250] Arcesilas, and stole away Medea, with her own help, to be the death of Pelias.
Pindar, Pythian Odes, VI

In Apollonius’ version, the crew includes both Heracles and Orpheus. The ship itself has conscience and speaks to the men.

The crew visit Lemnos, a city ruled by women after the murder of the men and become accidentally embroiled with the six-armed Earth-born men. Heracles relationship with Hylas may also be homosexual (although this is only hinted at). The gods themselves are also more human. Aphrodite is asked for help by Hera but is squabbling with her son at the time.

In the Argonautica, Medea has a more important role. She is a magician, a priestess to Hecate and the love interest of Jason. She also conspires to have Kind Pelias murdered by his own daughters.

Harryhausen’s film is a brilliant version of the myth which draws on the legacies of the Greeks and becomes part of the essential chain which keeps the stories circulating and relevant. It is not possible to talk about Jason without mentioning this film. Part of its charm are its retro effects and wholesome world view (which is perhaps not as innocent as it first appears). It nevertheless is a film worth revisiting.