The snake is a mysterious creature. According to Genesis, the serpent tempted Eve in the Garden of Eden. As punishment God commanded that “upon thy belly shalt thou go, and dust shalt thou eat all the days of thy life”. It is a powerful scene and one that resonates to this day.

The snake however was more subtle than this and at different points had a much more enigmatic meaning.

In Egypt, snakes were symbols of power and protection. The Uraeus, a cobra goddess, was worn on the crown of the Pharaohs. She would rear her face and spit at the enemy of the kings.

The goddess Renentuet was the cobra goddess of motherhood and the harvest. She was also associated with the annual flood. This may be because cobras were more visible to ancient Egyptians during the flood period.

By the Greek period, Renentuet had become associated with Isis in the guise of Isis-Thermouthis. She was particularly popular in the Fayum region of Egypt, where she was married to Sobek.

Snakes were also dangerous creatures. Horus is often shown standing on crocodiles and holding scorpions or snakes in his hand. This image is perhaps a form of protective magic. 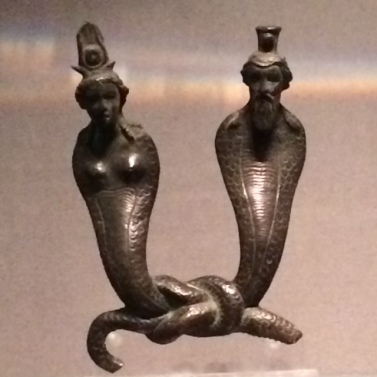 In Greece, snakes were used in houses (alongside weasels) as mouse and rat catchers.

Snakes had a complex symbolism in Greece. Hera sent two snakes to strangle Hercules in his cot. Hercules, displaying his divine strength, killed them both. The Gorgon Medusa is portrayed with snakes for her hair.

On the other hand, Athena wore a snake finged poncho (or aegis) and the Minoan Snake Goddess is a divine figure holding two snakes in her hand. Snakes were associated with their power to kill but were positive attributes.

Aclepius, the god of healing, has as a symbol a snake around a rod. This is still the symbol of the medical profession the world over.

Asclepius had several temples around the Greek world. People would travel to the temples and sleep over night hoping for a vision from the god in their dreams. Tame snakes would crawl around the floor. Perhaps the snake symbolised rebirth (the shedding of its skin) or the association between venom and drugs (the Greek world pharmakon).

Snakes continued to be used during the Roman period as a way to control rodents. Lares, or house hold gods, were sometimes portrayed as snakes. Some scholars believe that tame snakes themselves were identified with the Lares.

The cult of the goddess Isis grew in important during this time. Temples were built across the Roman world. It has been speculated that live snakes may have been kept in some temples, including the Great Isis Temple in Rome.

The Satirist Lucian reports that Alexander of Abonoteichus spread the cult of a snake god called Glycon. Glycon was also an oracle. Lucian reported that the Alexander was a false profit and the snake, merely a sock puppet. However, he was popular. Apparently he advised Marcus Aurelius in the German Wars. A coin from the reign of the Emperor Antoninus Pius shows the god.

More intriguingly it was reported that Plotinus, the teacher of Neo-Platonism (a mystical development of Plato), became a snake when he died. His disciple Eustochius reports that snake crept from his bed, and then disappeared through a hole in the wall, at the moment he died.

The snake is one of the first animals mentioned in the Bible as the deceiver of mankind. However, the snake is more ambiguous than this.

During the Exodus, the Hebrews were plagued by snakes. Moses set up a Brazen Serpent:

The Brazen Snake may have survived to a later period until it was destroyed by Hezekiah.

In the New Testament, the snake is associated with negative aspects. John the Baptist calls the Pharisees and Sadducees, “Ye serpents, ye generation of vipers”. Jesus says “Behold, I give unto you power to tread on serpents and scorpions, and over all the power of the enemy: and nothing shall by any means hurt you”. It is curious that such imagery resembles ancient images of Horus. Nevertheless it is a negative portrayal of the snake.

In Revelation, John tells how he saw an image of a woman and a snake which he identified as Satan (sometimes translated as dragon). The woman has been associated with the Virgin Mary, but many scholars draw comparisons to imagery of Isis.

It is surprising then that Jesus also tells his disciples “Be ye therefore wise as serpents, and harmless as doves”. The serpent is a wise creature here, but what else is Jesus saying?

Jesus, himself, was also associated with the Brazen Snake in the Gospel of John:

And as Moses lifted up the serpent in the wilderness, even so must the Son of man be lifted up: That whosoever believeth in him should not perish, but have eternal life.

It might seem strange to modern Christians to learn that Jesus was sometimes identified with the serpent mentioned in Genesis. Some Christian groups thought that there was a difference between the Old Testament God and the New Testament God and saw the parable of the Garden of Eden as a story of man being deceived. They linked it with this passage and saw the snake as a redemptive figure seeking to enlighten humanity.

Several ancient gnostic groups were described by Christian writers, four of which also revered snakes. The Ophites, the Perates and the Naassenes were all mentioned by Hippolytus. 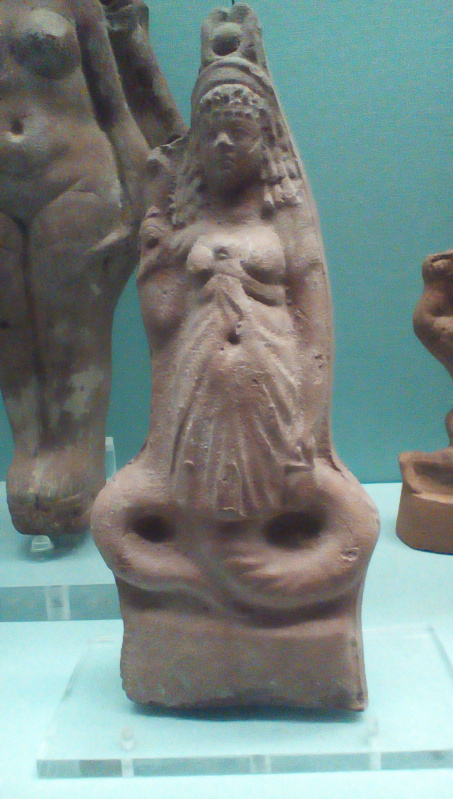 Python was a serpent who lived at the centre of the world. The god Apollo saw it and took over its cult centre at Delphi. The priestess of Delphi who was believed to have visions caused by fumes from the earth, was called the Python.

Ouroboros, the world snake whose tail is in its mouth, circled the world. In later Gnostic thought it symbolised eternity. In Norse mythology when Jörmungandr, the world snake, releases his tail, Ragnorak begins.

The snake had different meanings, which were sometimes paradoxical at any given time or within specific communities. Today it is wholly bad as the sayings “snake oil salesman” and “snake in the grass” show. Both sayings draw on images from the Genesis, but do not recognise the more abstruse symbolism. Perhaps, we should rethink the snake. No, as “we” race to destroy the natural world, it is an imperative.

Bronze coin of Antoninus Pius minted in Abonoteichos and showing the snake god Glycon with the legend by Classical Numismatic Group under CC BY-SA 3.0

One thought on “Snakes in the Ancient World”