The Egyptian Peasant Papyrus is enjoying a trip down the Nile with the royal family when they are suddenly attacked by sea monsters, gorilla-esque. He wakes. It is a dream. But the waking world is more fantastic than any dream.

Papyrus was first published in 1974. It is a Franco-Belgian comic (sometimes called Bandes Desinees to differentiate them from American comics).

There have been 33 French language books. There have been six English books (2007-2015). The Rameses Revenge is the first English translation, although not the first in the original French series.

Franco-Belgian comics are often drawn using solid blocks of colours and uniform lines. Similar comics would include Blake and Mortimer, Adventures of Alix and Asterix.

Papyrus is drawn in a more cartoony style, with stippled shading. One of the joys of reading the book is the exquisite draughtsmanship of Ancient Egyptian art. The cartoon has a very sparse background with the exception of mesmerising portrayals of ancient Nile barques, royal processions and the great Abu Simbel temple. Objects are seen from a child’s point of view, with atmospheric foreshortening.

Book covers in the series include major masterpieces of Egyptian art – the step pyramid of Djoser, the death mask of Tutankhamum and the Sphinx of Gizeh.

Lucien De Gieter was an artist associated with Spirou (a Franco-Belgian major comic book). With the success of Papyrus, he was able to take extended trips to Egypt where he studied the art and landscape of the country.

Papyrus is a young person’s story and feels at time like an educational book. We are given the background and plans to the temple. The names of several gods and goddesses are used throughout the story to an almost unnatural degree. 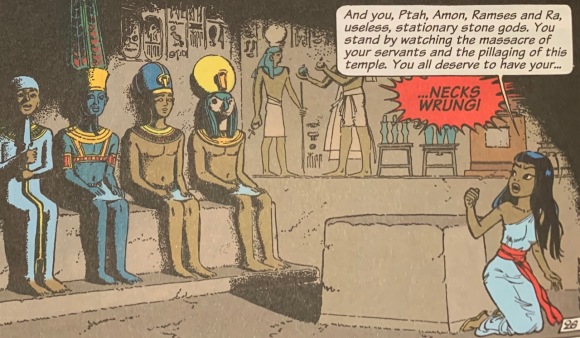 Egypt has a magical land and even Papyrus has a magic sword. Magic is a gift from the gods. The Gods are called on through the plot. The Princess Theti-Cheri is a high priestess of Isis. Isis was ascribed with magical powers from an early age. Stories recorded on the walls of the pyramids, tell how she found out the name of Ra and was able to control him. In the later Greek period she was identified with great powers in hymns of praise, inscribed on her temples. Egypt and magic has had an abiding association because of Hermes Trimegestus and (much later) the Freemasons.

Although the comic is set in an indetermined period* after the building of Abu Simbel, it is notable that no mention of animal gods are made. It was precisely during this period that animal worship became institutionalised. Although gods had often been portrayed wholly or partly as animals, from this time animals were increasingly venerated. The Apis bull or the crocodiles in the Fayum are the more famous examples, but many temples had live animals. We get a sense of the danger of Egyptian fauna, but not the veneration to which such animals were held.

For a young person’s book it explores complex themes beyond Ancient Egypt. Ideas like race, gender and ability are explored in a subtle ways which are comparatively rare in fictionalised accounts of Egypt. Many artists of the twentieth century were influenced by the depiction of Egypt by Victorian artists and have continued tropes and ideas which have created an idea of Egypt based on the colonialist assumptions of the late nineteenth century.

Is Papyrus completely free of this? No, the portrayal of the young princess is particularly sexualised in a way that “Eastern” woman often are in male art but compared to many comics set in the Ancient World this is a refreshing portrayal of Egypt.

Papyrus: The Rameses’ Revenge is published by CineBook.

*Elsewhere the series is said to be set in the Nineteenth Dynasty, which is perhaps too early for the developed animal cults of the Late Period and on.

All images in this review have been used under Fair use as part of a review under copyright law and will be taken down if requested.

One reply on “Papyrus: The Rameses’ Revenge”