A soothing presence lingers over the Ashmolean’s current show Last Supper in Pompeii. The foibles and tastes, snobberies and cruelties, fears and beliefs of the ancient Romans are reduced to a polite dinner party, like so many dinner parties before, in Oxford and Cambridge, Chipping Norton and Pimlico.

The Romans were dinner partiers par excellence. Some of the most resonant images of Roman excess are from parties. From Pertronius Arbiter’s Satyricon to Alma-Tadema’s Roses of Heliogabalus; it is an image that has haunted the western imagination.

The power of such images gains from an eroticism, linked to exquisite taste and cultural allure on one hand and power and domination on the other.

The other great image of Rome is one of destruction. From Gibbon’s Decline and Fall and Thomas Cole’s great series The Course of Empire which imagined Rome as an exemplar of earthly kingdoms, through to the fervid fantasies of far right wing politicians like Boris Johnson.  Rome is a paragon of loss.

The two symbols are combined in the great image of Pompeii. As well as a rich archaeological site, it is a place that resonates with complex meaning.

Not for nothing, does the show’s title mirror echo a certain film by Bertolucci. 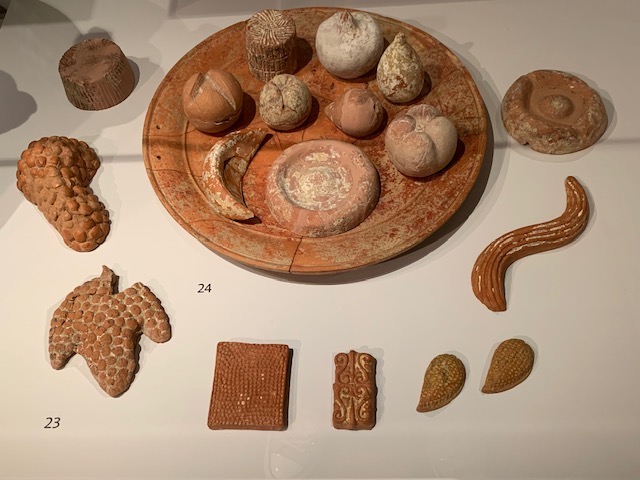 But really, the exhibition is one not of show, but of absences.

Some justified, some not. 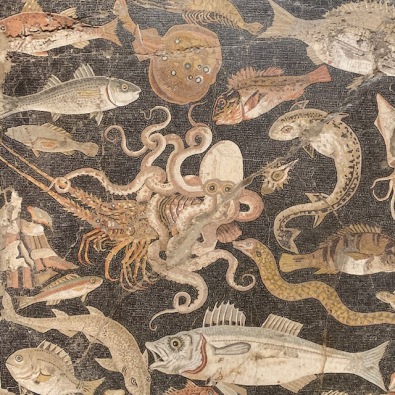 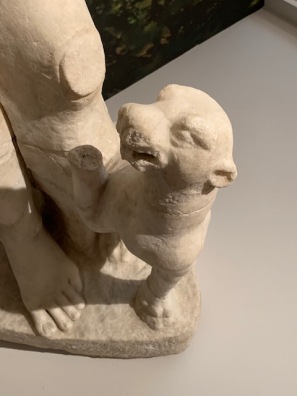 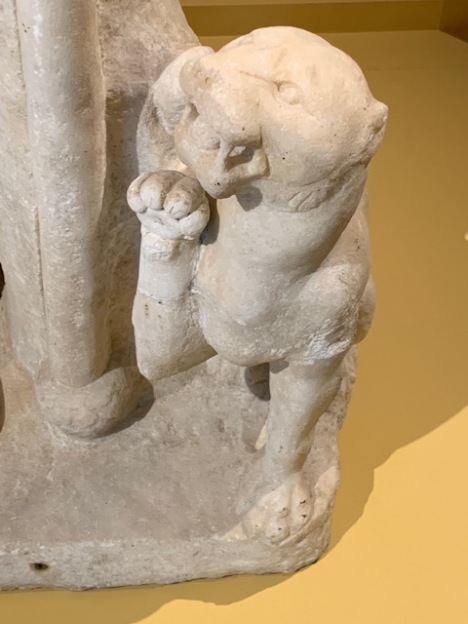 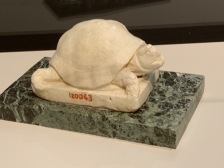 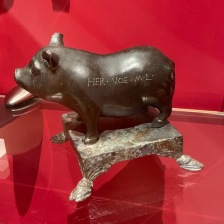 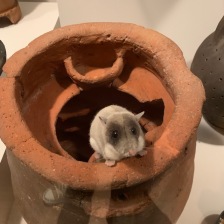 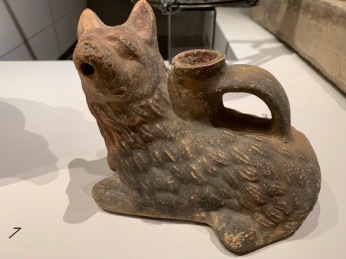 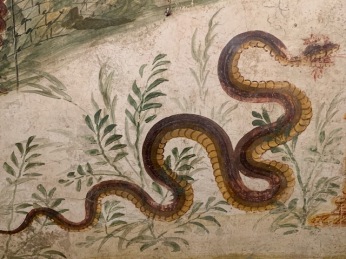 There is barely a mention of the great Roman novel the Satyricon and its scene of culinary excess. In the famous Supper of Trimalchius, the super rich ex slave, displays his wealth.

The ‘Cena Trimalchionis’ depicts a distasteful excess of everything. The food (too much meat), the precious goods, the slaves; everything is done to show off money and culture.

Then the preliminary course was served in very elegant style. For all were now at table except Trimalchio, for whom the first place was reserved, by a reversal of ordinary usage. Among the other hors d’oeuvres stood a little ass of Corinthian bronze with a packsaddle holding olives, white olives on one side, black on the other. The animal was flanked right and left by silver dishes, on the rim of which Trimalchio’s name was engraved and the weight. On arches built up in the form of miniature bridges were dormice seasoned with honey and poppy-seed. There were sausages, too, smoking hot on a silver grill, and underneath (to imitate coals) Syrian plums and pomegranate seeds.
Cena Trimalchionis

The film silver plate and sublime Roman glass, on show, is perhaps too tasteful for the type of entertainment Trimalchio enjoyed. 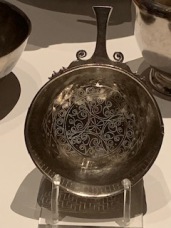 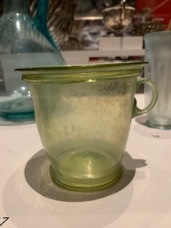 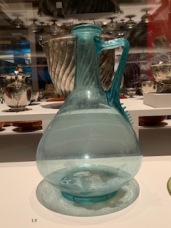 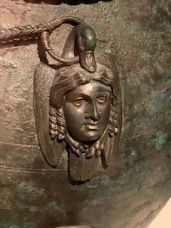 Educated Romans were connoisseurs, dilettantes. They collected Greek art. Originals when they could and copies, of varying quality, when they couldn’t.

Yet a small part of this exchange in culture was built of plunder and exploitation. Educated Greek slaves taught Roman schoolchildren (mostly boys) Homer. The Siege of Corinth in 146 BCE was infamous in ancient times for the amount of art brought back to Rome.

Nowhere is this intermingling of displayed power, exoticism and luxurious style better seen than in the images of Egypt.

Pompeii is full of scenes of the River Nile in flood. Called Nilotic landscapes, these images show a happy and fecund land.

After 30 BCE Egypt was also a conquered land and an important source of bread. 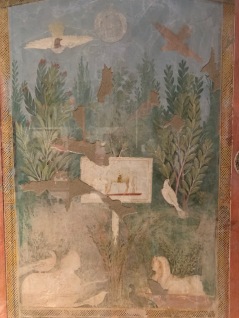 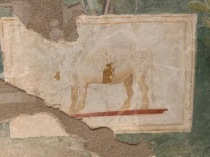 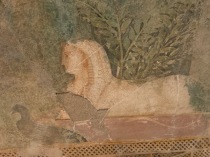 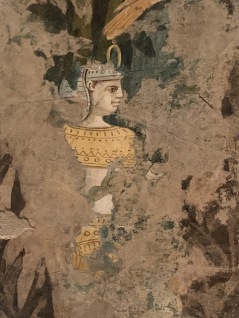 The exhibition shows many gods. Bacchus (Dionysius) is the most common. A statue depicts him in benevolence and majesty, in the first room. In the next room, a statue of a follower resembles his pose. In other rooms we see images or dedications to Ceres, Hercules and Venus. 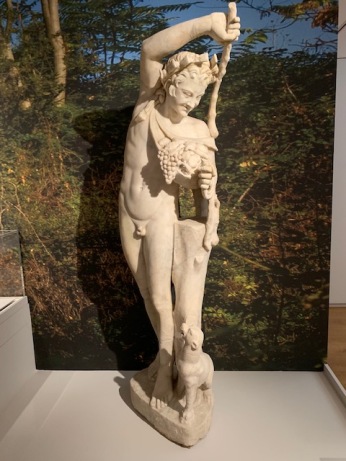 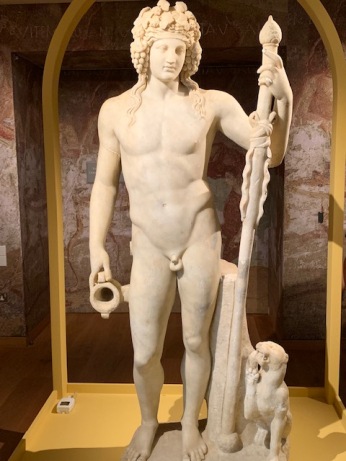 A fine image of Bacchus shows him in front of Vesuvius, both a landmark and a source of plenty as a result of its fertile soils. A snake coils beneath him. The divine link between feast and famine is clear. 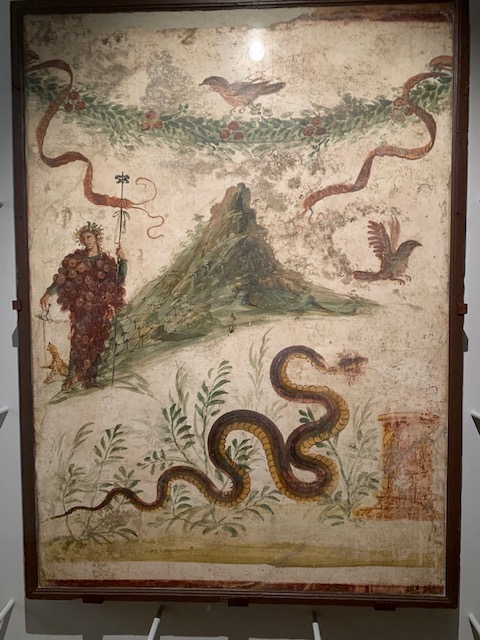 More confusingly, the final room, several notable statues from Roman Britain are displayed including a Mercury and three matres from Cirencester and a Serapis from Roman London. Their link to food and Pompeii is not clear, but they are still fine pieces and always worth putting on display.

A notable item from the exhibition shows the goddess Isis Fortuna, wearing a small tiara-like Egyptian crown of cow horns and moon disk and holding the steering oar of a ship and a horn of plenty (cornucopia). 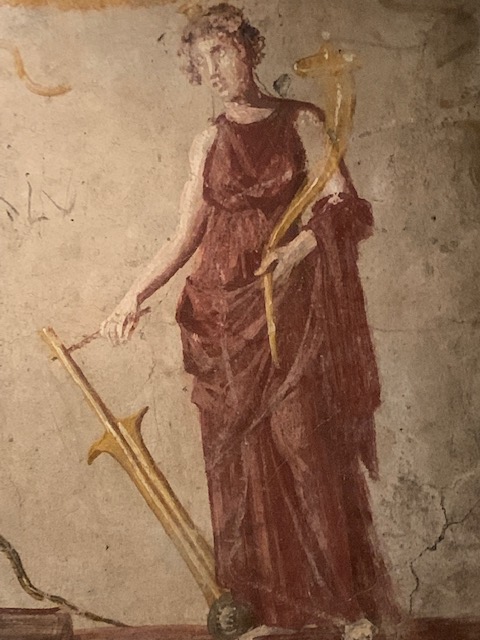 This image of the goddess was likely placed over the potty placed in the kitchen. Next to her is shown a squatting man, with a tense look on his face, every muscle straining, seeking some form of release. Two kindly snakes hover over him. Snakes could be protective domestic gods. (The Greeks kept tame snakes in their houses to kill mice.) But snakes were also linked to the goddess, especially in her protective role as Isis-Thermouthis.

The goddess’s power was sought to protect her adherents. Yet with all the bacteria likely to be found in the kitchen, it is only a surprise that the man depicted here is struggling to void his bowels. 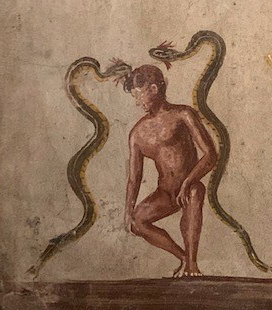 The most damning absence however, is that of slavery. The entire Roman system of production and consumption was built on slavery at every stage, from field to factory to the kitchens and dining couches.

The exhibition shows a warrior bringing two conquered enemies home. His wife holding a glass of wine up to him. The two men would likely become slaves. Another item, a fine terracotta, shows an actor dressed as a farmer, or slave, on his way to market. His protruding phallus makes it clear he is an actor, rather than an actual slave. 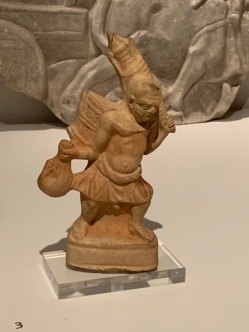 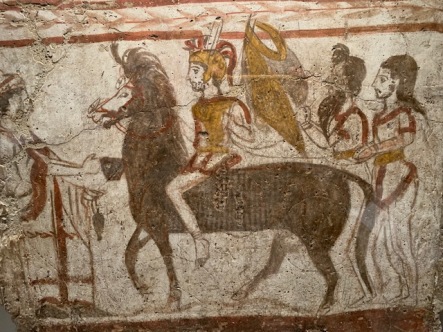 Slaves were not absent from Roman art. Indeed they are displayed on many of the objects on show, yet the curators chose not to discuss theses portrayals. Towards the end, they do draw a link between an item on show and slavery. The captions say:

Slaves were often educated and valued members of the household, rather like the below-stairs community portrayed in Downton Abbey. Their appearance and behaviour contributed to the success of the dinner party and the family as a whole. Slaves who has worked well might be granted their freedom and some became rich and influential.

It is true that some slaves were valued members of the household. Cicero’s slave, Tiro, is an obvious example. Others, once released did become rich. Trimalchio is another example, but memorials from Rome also provide evidence of this.

Yet this caption whitewashes the entire experience of Roman slavery which alongside back breaking work could include humiliations, violence and rape as every day occurrences. Cultured Romans looked down on cruel masters. Looked down, but looked away. Slavery was never strongly challenged in the ancient world.

This was not Downton Abbey by any stretch of the imagination.

And yet, much of Downton Abbey’s narrative power comes from the tension between the upstairs world and the downstairs world. For all its cruelties, Roman drama also understood this culture. The cheeky and smart slave was a mainstay of Roman new comedy. Lurcio, played by Kenneth Williams, in Up Pompeii is placed within this tradition.

Opening up space to the experiences of slaves would have made this a broader, more powerful show. As it is, this is still an excellent show, as any exhibition displaying objects from Pompeii will always be. Yet it was a missed opportunity for a deeper examination of what Roman food display meant. 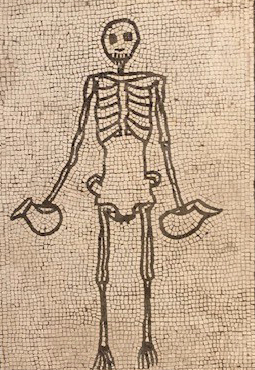