Alma-Tadema: at home in Antiquity at the Leighton house Museum

The Leighton house Museum is currently exhibiting the work of Lawrence Alma-Tadema the perennially unfashionable and influential painter of ancient scenes. With a floruit in the mid-Victorian to the Edwardian period, Alma-Tadema’s historical works are as much concerned with contemporary European morality and consumerist luxury as they are with the ancient stories they depict.

This exhibition emphasises Alma-Tadema’s work within the context of his family house. This is a very humane focus but misses his intellectual development and his connection to contemporary artists and musicians. Alma-Tadema is famous for his paintings of the ancient world, full of lounging mopey characters gazing at pools of fish or staring into the near distance. 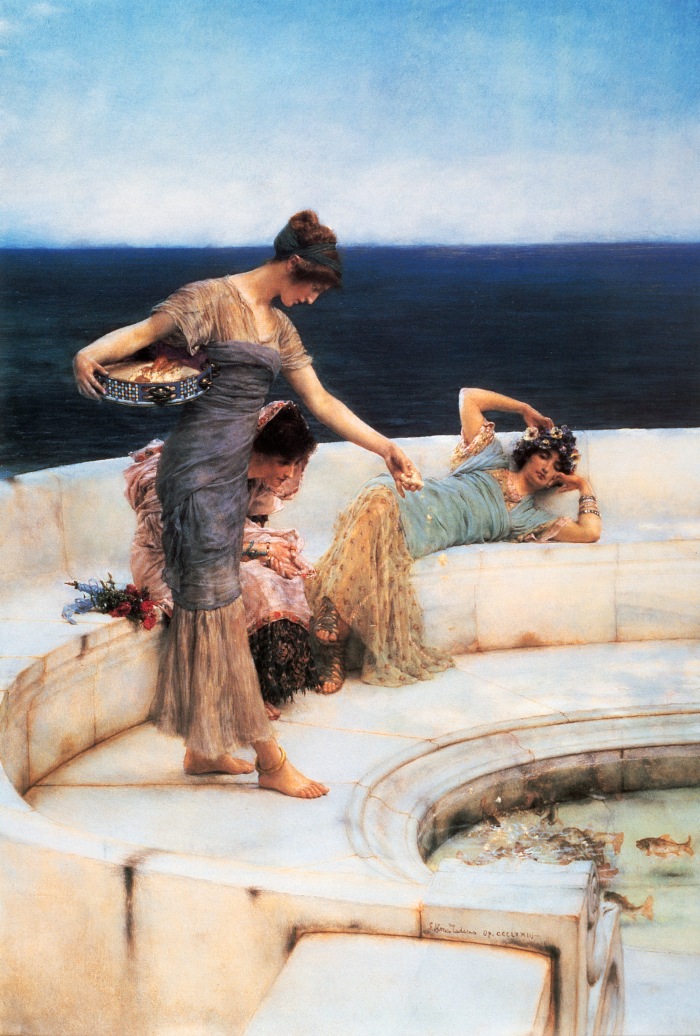 At his best Alma-Tadema “brings to life” the ancient world with vivid sometimes uncanny details. Several of his paintings are well known, but I found myself intrigued by the lesser known works. In The Flower Market a Roman man walks past a market stall selling cacti. Did the Romans buy cacti? I do not know, but I would like to find out.

Alma-Tadema’s two strengths are his focus on the materiality of the ancient world and human psychology. His paintings are rich with the surface detail of rich embroideries or textured mosaics. In this he closely resembles contemporary realist novelists with their focus on the objects that pervade life and inform the personalities of characters. Compare an Alma-Tadema to an earlier artist, say David, and the difference is obvious. In David’s Oath of the Horatii the brothers are manly paradigms of stoic ideals, placed against a plain background. In Agrappina Visiting the Ashes of Germanicus (a stock image for artists), Agrappina lolls on embroided couch, wearing flowing red robes over a colourful stola, against a background of detailed marble. Her face is depicted at the critical moment between denial and anger, between restraint and outpouring.

The other strength of Alma-Tadema’s paintings is the human psychology. In The Death of the  First Born the pharaoh holds his son, his face emotionless and yet also racked with great pain and resentment. In Queen Fredegonda at the Death-Bed of Bishop Praetextus the evil queen stares impassively at the bishop and all his monks, only the shadow of a sneer on her face. It is possibly this drama in the paintings which influenced later movie directors. The exhibition shows a video which plays side by side Alma-Tadema’s paintings and the movies they visually inspired. The movies date from the silent period through to Sir Ridley Scott’s Gladiator.

For all that however, the paintings feel too rigidly posed and structured. They lack the naturalism of more accomplished artists. In this exhibition, some of Alma-Tadema’s lesser known works take on a more important role, whereas some of his more famous works feel diminished when viewed in the flesh. His most famous work The Roses of Heliogabalus loses something when viewed at this size and is best viewed on the cover of a paperback. It is still a fine work, but viewing it in person I was more intrigued by the frame than I was by the art itself. Indeed, one major regret was that the guides did not consistently list the paintings’ afterlives. Why for example, were some frames Art-Deco masterpieces and others more restrained affairs.

Overall this exhibition raises Alma-Tadema’s reputation from a purveyor of mere-Victoriana. Yet there seemed to be an internal tension raised by contextualising him as an artist centred on the family home and not an artist engaged with antiquity, even as the majority of paintings dealt with this subject.  Too much of the exhibition felt like special pleading. For example, there was not enough examination of Alma-Tadema’s sources for paintings: how much was based on study (and what were his sources) and how much on his imagination.

If you are new to either Alma-Tadema or Leighton, then this is the exhibition to go to. The Leighton House Museum, in all its Victorian period orientalist style, is the perfect setting to reappraise Alma-Tadema’s oeuvre. A recommended trip this autumn.

Three out of five.

One thought on “After the audience”