It is notable, that although Egypt is considered by many to be the source of Art Deco architecture, it contains few Art Deco buildings itself. That’s not because it’s an old city. In fact, it’s a very modern city (experiencing great growth in the twentieth century). It’s also rich in modern architecture and contains examples of many of the styles popular since 1900.

The reason for this is perhaps to do with the cinemas.

In the first decades of the last century, most cinemas in Egypt were outdoor screens. The ornate and luxurious style of Henry Cole were not needed and Egyptian architects chose the more austere and elegant swerves of streamline moderne.

Egypt the land which rises from the desert, dreamt of the seas.

Everyone knows that Egypt is a land of beautiful historic architecture. Egypt’s respect for her built environment has had some dolorous affects however.

artefacts produced by different cultures as a result of arts, sciences, literature, or religion; which are indicative of different historic periods from prehistory to a hundred years ago” may be considered for heritage status. This law has often translated as a deadline for owners to damage or demolish their buildings, since heritage status as it is currently prescribed in Egyptian law does not translate into financial benefits to owners.

Preservation here means that the building must be vacated and turned into a museum. This has led to owners scrambling to destroy buildings before they reach their centenary. There is a flourishing trade in destroying buildings by subtle and underhand means, acid in the structure or accidental fires.

This is a great tragedy as one of the world’s richest cities for Streamline Moderne buildings is slowly despoiled of her treasures.

It also ironic when you consider the fate of the Villa Umm Kulthoun, the former house of the singer Umm Kulthoun – the Voice of Egypt, Egypt’s Fourth Pyramid – one of the best selling musicians of the 20th Century, an icon in Egypt. The house in Cairo was knocked down, but a replica was built in Baghdad which still survives.

Is it fair to compare the situation in Egypt to that of Britain with its rigorous listing system and commercial reuse of old buildings, in which so many notable buildings have been knocked down just before they were listed or by accident during the renovation process.

Egypt and Britain were closely connected for much of the twentieth century. First through an obscured colonial control of the ‘Veiled Protectorate’ and then through an uneasy relationship that erupted into war in 1956.

One major difference between the two states was that following the Second World War European cities had a new building boom to repair war damaged buildings, the moonscapes of rubble were turned into vast new modern urban centres. Egypt was an important site of conflict during this war, but did not experience the same level of urban destruction. Buildings continued to be built. In 1945 the architect Sayed Karim commented that Cairo’s “slow incremental deterioration” had caused more damaged than that of European cities in the war.

Both countries, however, drew on and feedback into the great period of architectural experimentation of the first decades of the twentieth century as new ways of living were thought out in imaginative new cityscapes of utopian architecture. Egyptian modernism was not linked to the same sense of utopianism, but the twentieth was an optimistic century following independence from Britain in 1922 and the Egyptian Revolution of 1952. Following the Six Day War in 1967, Egypt entered a period of national trauma and the International Style was seen as an “expiring architecture”.

The most notorious building from this period was perhaps the Forte tower. Built in 1976, it rises 166 metres over the chichi Zamalek district, making it the tallest building in Egypt. But it was never finished. Building work stalled during the transition between Presidents Sadat and Mubarak and local protests over parking put the project on hold.

History on the streets

Compared to Britain, the streets of Egypt are rich with the accretion of history. Cairo jostles with the architectural styles of various nations and periods.

You can read Egypt’s history on the streets of Cairo. From the medieval mosques and synagogues of the Old City to the Great Egyptian Museum on the outskirts looking out on the last of the Seven Wonders of the World.

The architecture of a city tells its history, not just what happened, but how it wants to present to the world what happened. The urban vernacular chosen in Egypt from the second half of the Twentieth century was a Neo-Mamluk which proudly asserted Egypt’s medieval history as a global power. It also contrasted with European and Ottoman styles.

Neo-Mamluk focused on “surface detail features of the style (ablaq masonry, use of pointed muqarnas, monumental calligraphy in Nashkhi script, interlaced floral and geometric patterns)”. The Doctor’s Syndicate (1949, Ahmed Charmi) is a late flowering of this style where Deco meets Neo-Islamic in a serenely ornate building.

Cairene architecture was not just one style adopted from above. Her society was too rich, cosmopolitan and culturally omnivorous. Cairo gems include a Japanese Garden dating from 1917 (Muhammad Mustafa) and an Indian-inspired Palace with adjoining Cathedral dating from 1911. Perhaps the most spectacular building is the Villa Badran, a sensuous curvy building designed by Gamal Backry and built in 1971. A reaction against modernism, it is built from “interlocking bulbous forms”. 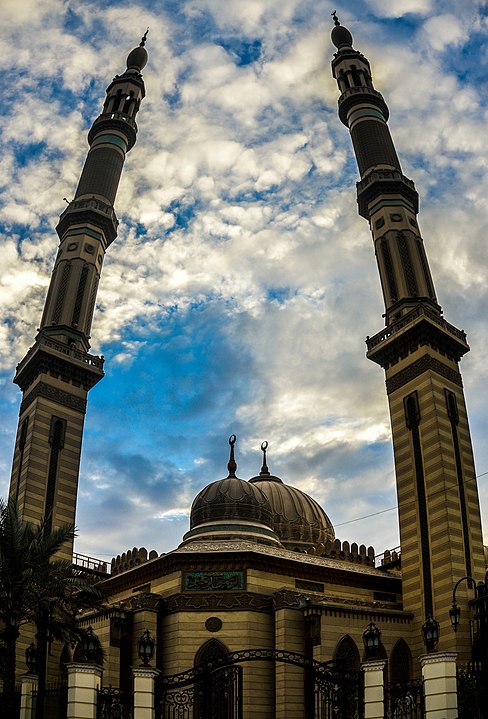 Mohamed Elshahed’s new book Cairo since 1900 details the buildings from this city, which is both ancient and very modern.

Cairo was built in tenth century during the Fatimid Caliphate, developed on the settlements, which had built up around an old Roman camp Babylon. The area has an ancient history with links to the Pharonic capital of Memphis. Amir, who conquered Egypt in 640/1 CE settled his government in the area at the settlement of Fustat.

In the Medieval period, Cairo was an important intellectual and economic centre. It has been estimated that during the Mamluk period, it was the most populous city west of China.

In 1798, the city’s population was less than 300,000 inhabitants. Today it is around 9.5 million. Much of this growth took place in the Twentieth Century.

With new buildings and entire new neighbourhoods planned. Each neighbourhood of Cairo has its own character. Zamalek is a “leafy, elite district” whereas Shubra is more working class and was home to several immigrant communities in the early decades of the twentieth century.

Egypt is a multifaith society with a majority Muslim population and large Christian minority of which many are Copts, members of the Miaphysite Church.

Elshahed notes several mosques but praise is singled out for Al-Rahma Mosque (1982, Hassan Rashdan and Hassan Metwalli). It is built around an octagon pyramid shape topped with a dome and surrounded by brutalist minarets. A superb building.

Churches are notable in the record of Twentieth Century buildings with different denominations building statement pieces. The Episcopal/Anglican All Saints Cathedral, designed by Awad Kamel Fahmy and Selim Kamel Fahmy, sits on land donated by the Egyptian government. It is uniquely shaped as a lotus flower, the ancient Egyptian symbol associated with rebirth and the divine child Horus. It is said to be designed in the shape of a cross at ground level and a crown at the top.

St Catherine’s Church (1950, Naoum Shebib) was commissioned by the Syrian community  and consists of  a ribbed vault: “the building reimagines what a church building can be without entirely doing away with established typologies”. Whilst St Mark’s Coptic Cathedral (1868, Awad Kamel Fahmy, Selim Kamel Fahmy, Michael Bakhoum) reimagines traditional typologies in the contemporary medium of reinforced-concrete.

For millennia, Jewish communities settled and thrived in Egypt. This changed following the creation of the modern state of Israel, even if Egypt and Israel are both allies. A notable reminder of this history can be seen on the al-Ahram Vocation High School (1928, unknown architect) an otherwise standard piece of Deco Vernacular with carved motif corniching which references the palm-tree motifs found in Cairene synagogues.

The museum built in 1902 following Egypt’s first architectural competition. It was built in the Beaux Arts style by Marcel Dourgnon with Egyptian detailing.

The Saad Zaghlour Masouleum (1931) is a late flowering of Victorian Funerary architecture which is normally more suited to North London than Egypt. In Mustafa Fahmy’s sensitively used local stone carved by skill masons for a building that transcends its own limitations. 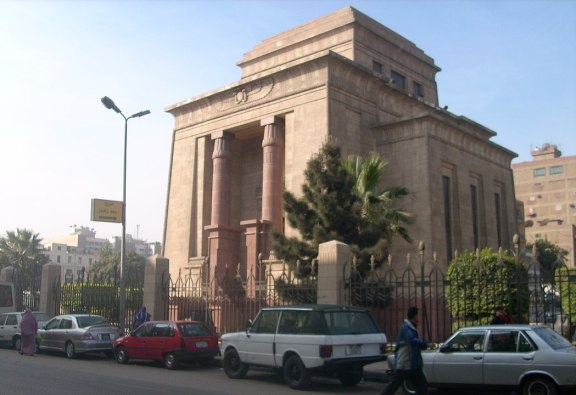 A pastiche of Ancient Temples built in 1946 by Mustafa Fahmy in the shadows of the Great Pyramid. This building is not in use today. The interiors were furnished in various styles – Arabesque, Louis XIV and Art Deco. King Farouk also chose the Tutankhamun throne to be copied and placed in this building.

Ancient Egypt meets the International Style in this 1962 building by Ramses Wissa Wassef. Originally built to make the most of natural light to show off the sculpture of Mahmoud Mukthar, this building is fronted with five square pillars reminiscent of ancient temples.

A memorial following the October War of 1973, this monument combines the classical arch and the traditional Egypt pyramid in a very moving piece of modern architecture.

Designed in 1984 by El Ghazali Kosseiba to showcase objects from the whole of Egyptian history. It is topped by a pyramid, a motif repeated throughout the building. It partially opened in 2017.

The Ministry of Foreign Affairs

Playfully combines Islamic double arches with the papyrform column. Dating to 1994, it does with a few details more convincingly what Terry Farrell did with so many in his government building in Vauxhall of the same year.

Built in 1999 by Ahmed Mito this is postmodern as its most gauche. A brilliant pastiche of the quoting of ancient buildings, this is Egypt’s answer to No 1 Poultry.

A glass and steel behemoth overlooking the pyramids of Giza with references to the triangular shape. This museum seeks to monumentalise itself and thereby fit into its neighbourhood.

It is a truism that all art and culture is derived ultimately from Egypt.  Her powerful influence has been felt throughout the centuries, sometimes obscured by Classical or Baroque detailing,  sometimes directly Egyptian.

It is not surprising then that within Egypt itself, some of her most gorgeous buildings come from the last 100 years. Although with a history as a rich as Egypt’s, perhaps every century since for at least three thousand years can claim that.

Although ostensibly treated as a guide, in its fat pocket-sized edition, this book is in fact a work of deep scholarship. Elshahed’s book is notable for the buildings which cannot be found – those never built or already demolished. Together they create an evocative portrait of one of the world’s finest cities at a moment of change.

Memorial to the unknown soldier by Estr4ng3d CC BY-SA 3.0