Although Anubis the great god discovered and passed on the science of embalming the dead, there was according to Herodotus, some distrust of embalming:

Wives of notable men, and women of great beauty and reputation, are not at one given over to the embalmers, but only after they have been dead for three or four days this is done that the embalmers may not have carnal intercourse with them.
Herodotus II, 89.2

There is a lot going on in this passage, not least the tabloid aspect of necrophila. It is believed that a chief embalmer wore the mask of Anubis during the process of preparing the body. Wearing the mask, meant he acted on behalf of the god, that he became the god. The interchange between man, animal and god – and I use the term man intentionally – was never clearly demarcated.

In his polysynchrotic work, Roberto Calasso traces the origins of this connection from its perceived origins in the hunt and shamanistic religion through Persia and Egypt to the High Culture of Greece and Rome. It is a profound book which shows a wide ranging erudition.

It is Egypt that humanity’s understanding of animals was most perfected.

Egypt was the inspirational source for the Greeks. Later tales told how Plato spend a time in Egypt learning from the Priests who were believed to be knowledge about all aspects of human knowledge.

Several authors claimed the Greek religious mysteries has an Egyptian origin. It is from Egypt that Plotinus came. Egypt was also a place where Gnosticism and Manichaeism spread across the Roman Empire.

Hecateus, a notable Greek intellectual whose works are not lost, travelled to Egypt in order to speak to the priests. In a famous exchange Hecaterus told an Egyptian priest that he could trace his family back sixteen generations to a god. The Priest looked scornfully back. He showed him a room full of statues of former priests, each preceding the other for millennia. “[For] 11,340 years there has been no god in human form”.

If the Egyptians lacked gods in human form, they certainly made up for them in animal form. Their animal gods, such as Sobek, were famous and perplexing to Greek visitors. Diodorus Sicullus suggested worship of gods began with the use of standards in warfare.

Divine animals creep into Greek myth, not least in the myth of Jason and the Golden Fleece. In his virtuoso exegesis, Calasso unpicks the canny, focuses on the gaps in the narrative and delves into earlier versions. The strangest part of the story is the Golden Fleece was taken from a divine ram who asked King Phrixus to kill it.

For Calasso, the great tension begins when humanity first began hunting animals. This trauma can be gleaned in the Vedas, in Shamanistic ritual and in the strange, unsettling Greek myths.

“The hunt is the place where the primordial separation occurs […] Man’s detachment from the animal was the great even among all events in history” (pg. 98).

With killing, comes the fear of retaliation. Is religion a form of appeasement for breaking this  primordial taboo? A similar question if the Greek gods can’t eat meat, why do they hunt? Is is for the pleasure of killing?

The Greek goddess of hunting was Artemis. In a famous myth, the hunter Acteaon sees her bathing and is turned into stag and torn apart by his own dogs. Actaeon was trained by the centaur Chiron, who took young men and educated them beyond the constraints of society.

Artemis had various names across the Greek world: the best advisor in Athens, the wielder of the Javelin in Sparta, the hanged goddess. She was most famously the Lady of Ephesus, her cult image sometimes called the many breasted. She was a strange unsettling goddess who didn’t fit in masculine compartments. She was a mother goddess, a virgin goddess, the most beautiful of all the goddesses. 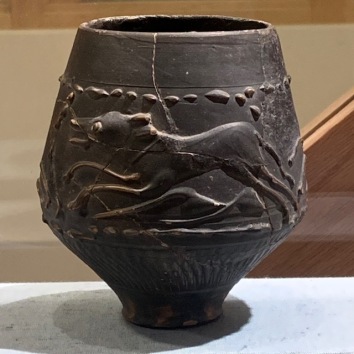 When humans began hunting they did not turn their back on animals, rather their relationships developed. Humanity has lived in a symbiotic relationship with various domesticated animals – the reindeer, dogs, cattle, cats, rats. Hunting did not define this relationship. Rather hunting was a response to a particular need for certain things at a historical moment which at a later date could be called the economy.

It’s also useful to consider that hunt scenes were popular throughout the ancient world, not least in Egyptian tomb art, whose marsh scenes show a fecund and moist nature, sexually suggestive. 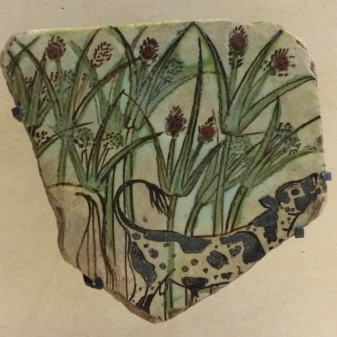 This is a text about texts and other forms of evidence are not explored to the same level. Art history and archaeology are under utilised.

For such a well read book, the referencing system is peculiar. Calasso often quotes an ancient author, without naming them. To get the reference, the curious reader needs to remember the page number, count the line number, go to the back, find the reference, go to their snook, pull off the Loeb and sometimes find the reference and sometimes draw a blank. Just as in music, the people of real taste just read the score, you can get a sense of a book from its references. The rest is just performance, although in this case it is a bravura performance.

It is nevertheless strange to read a study of the mythology, intellectual beliefs and animals in the Greek world with regular nods to India and Egypt and not see the honey-tongued author Aelian referenced. Aelian’s Characteristics of Animals is a peculiar book that draws on allegories and fables about animals.

This is however a brilliant book. For all its dense and intertextual readings, it is fluent and fascinating. A reader leaves it with a thousand thoughts bubbling in her head. Calasso opens new vistas, connecting different sources and asking left-field questions that set new paradigms. It is not a book to read in one sitting, but something to return too, which the styles makes inviting. Like Eluseius, this is a place to return to again and again.

Calasso holds something to show to those who return. 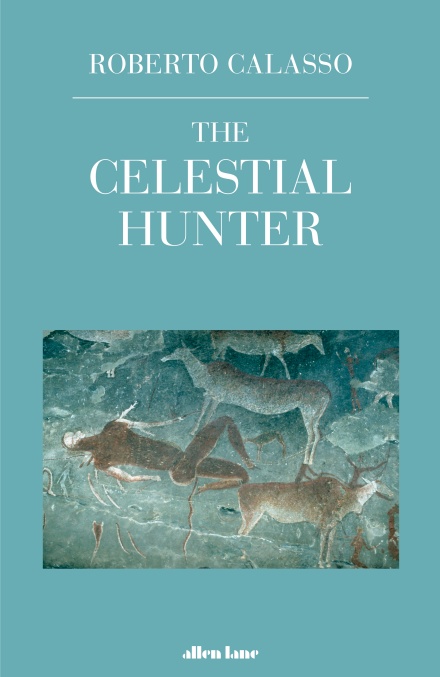 Roberto Calasso, The Celestial Hunter is published by Allen Lane and on sale now.

Book cover used under Fair Use as part of a review.

One reply on “The Celestial Hunter by Roberto Calasso”

Reblogged this on Die Goldene Landschaft.