The dog faced gentleman in the linen suit

Anubis is the jackal headed god of the dead, a powerful figure who led the dead to Osiris. His worship was carried throughout the Roman Empire, along with the cult of Isis.

Of all the Egyptian animal gods, only Anubis was worshipped outside of Egypt in his animal form. Images of him have been found on wall paintings, in sculpture, on coins and lamps.

In these images he is often shown with his dog head, wearing a cloak and holding a caduceus. The caduceus was the rod carried by Hermes. During the Greco-Roman period Anubis became associated with Hermes, as a result of both gods’ role in leading the dead to the underworld. This figure is called a psychopomp. Sometimes the image of Hermes and Anubis is called Hermanubis. A particularly fine example of Anubis from the Roman period can be found in the Louvre.

God of the dead

It is likely that Anubis had a strong role in beliefs and rituals of the afterlife. Egyptian religion across the Roman Empire was focused, at least partly, on beliefs surrounding death and the afterlife.

This reflected Anubis’ role in the pharaonic age. Anpu (to transliterate Anubis more closely to the rendering of his name in hieroglyphs) was the embalming god, a psychopomp and a judge.

Images of Anubis embalming Osiris are common in Egypt, but less common outside of Egypt. These images have a long tradition. Often found on sarcophagus, they are at once an image of the first embalming, an image of the mummy (on which it is depicted) being embalmed and a suggestion that like Osiris, the dead person mummified might find life in the hereafter.

Even more intriguing are the stelae found in Egypt from this period which depict two jackals. Historians are not certain what the two jackals refer to, but they may be a reference to the gods Anubis and Wepwawet.

In Ancient Egyptian depictions of the afterlife we often find two jackal gods – one leading the dead to judgement and one presiding over judgment. By the Greek period, these two figures had become linked in Anubis. The stelae suggest that earlier beliefs were understood.

The spread of Anubis around the Roman Empire

Anubis was a central figure in the religion of the Egyptian gods outside of Egypt during this period.

Several inscriptions survive which are dedicated to him. They mostly refer to the other Egyptian gods as well. At Delos he was the third member of the central triad. The French scholar Michel Malaiase has argued that it was from Delos (and not directly from Egypt) that the Isis religion spread to other parts of the Roman world.

If this hypothesis is true then it is in Campania that the change happens.

Campania was the first region in Italy that the Isis religion was established, in the port city of Pozzuoli. Statuettes and lamps from Campania show Anubis and Harpocrates of a similar size, either side of a maternal Isis.

Anubis’s position to the other Egyptian gods is complex. At various points he has been called Isis’ brother-in-law, nephew and step son. Plutarch points to the latter, but this was by no means the common belief. By the Greco-Roman period, he may even have been considered Isis’ son. 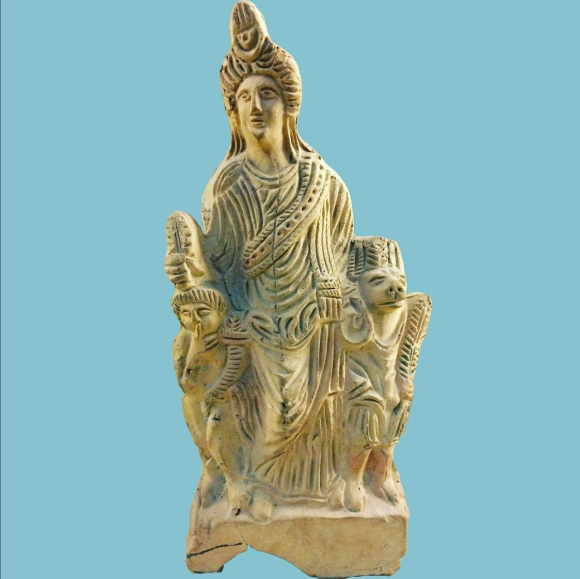 Images of Anubis are relatively common around the Roman world. Two types of object are most common.

Anubis is depicted on several gems. Linked to magic, and possibly esoteric belief, gems from Roman Egypt show Anubis alongside other figures like the Chnoubis. The magic was likely apotropaic (protecting from evil) or health based (apparently stomach complaints were the most common).

Terracotta lamps with Egyptian gods on them have been found across the Roman empire. In Roman Britain the highest proportion of these lamps depict Anubis on his own. This is unique in comparison with other areas of the empire where the proportions are more even. This may be due to the small number of lamps which have survived in Britain, rather than any adoration to Anubis. Yet it provides an insight into the popularity and spread of this most Egyptian of gods.

The man in the Anubis mask

Images of Anubis (and Egypt) in general abound in Pompeii and Herculaneum. This includes images of priests wearing Anubis masks. Apuleius reports that these were a central part of the Isis processions.

The figure of the masked priest intrigued Greco-Roman authors. Josephus even tells us that a man seduced a woman by wearing the mask.

Yet even as he was loved, he was also mocked. Negative references to him can be found in Vergil and Ovid.

The satirist Lucian took great pleasure in mocking him. In one dialogue between the gods, he has Momus ask Zeus why Eastern gods were introduced on an equal divinity with the Olympians: “I should just like to ask that Egyptian there–the dog-faced gentleman in the linen suit –who he is, and whether he proposes to establish his divinity by barking?”

The linen suit referred to the fact that priests in Egypt wore linen clothes as an act of purity, rather than wool. Linen was of course cooler.

Anubis is mentioned alongside several other gods, including Apis and sacred ibises. Lucian was a member of – what in the Twentieth Century would be called – the intelligentsia. His understanding of foreign cults reflects his knowledge and interests. Yet given the diverse spread of evidence for the god, it must be presumed that Anubis was a well known figure.

Anubis was an important god across the Greek and Roman world. The wide spread of evidence in different media suggests a diverse community of believers and a complex belief system behind it.

All other photos by Rhakoris CC BY-SA 2.0

4 replies on “Anubis in the Greek and Roman world”

[…] all the Egyptian animal gods, only Anubis was worshipped outside of Egypt in his animal form. Images of him have been found on wall […]