One of the bloodiest wars in the ancient world was that between the Armies of Mice and Frogs. Certainly in literature anyway.

It all began when the king of the Mice, escaping a cat, flees to a pond, the kingdom of the frogs. He encounters the kind of the Frogs who offered to host him in his palace. On their way, the two encounter a water snake and the Frog King sinks under the water in fear and the mouse drowns. In retaliation make preparations for all out war:

At a meeting of the gods, Zeus asks if his fellow divinities will take sides. Pallas Athena refuses. The mice eat her offerings and the frogs keep her up all night:

Nor will I yield the Frogs’ wants my supplies,
For their infirm minds that no confines keep;
For I from war retir’d, and wanting sleep,
All leap’d ashore in tumult, nor would stay
Till one wink seized mine eyes, and so I lay
Sleepless, and pain’d with headache, till first light

The war is a pitiless one and killings are described in visceral and anatomical detail.  From the start the mice take the upper hand. Outnumbered and facing their final annihilation, at the very last moment, Zeus takes pity on the frogs and sends an army of  lobsters to rout the mice. The battle is over. It only lasted one day.

A lot is going on in this short text. It is a pastiche of Homer and the style, themes and values of the Iliad. Homer’s descriptions of battle are also visceral and sometimes repetitive but through simile have a poignancy. In the Batrachomyomachia (Battle of the frogs and mice), there is no poignancy. The graphic violence is meant to be contrasted with the bathos of the participants. Yet, the religion of Homer is also gently mocked: “Whom sad death seiz’d; his soul flew through his wound”. Who wrote it and why? Possibly Lucian, or maybe Pigres of Halicarnassus, probably not Homer.

In the Batrachomyomachia, frogs are presented as cowardly, duplicitous and sensual. This draws on a long tradition.

Just as in contemporary Hollywood films, frogs and their croaks were relatively ubiquitous in Ancient Greek texts.

As many people now know frogs’ croaks differ by location (or more precisely by species, which are located in particular environments). Aelian describes this difference in sound. He reports that the frogs who kept the hero Perseus awake on Mount Pireus in Thessaly were condemned to silence (Aelian 3.37). He also writes how the frog’s croak was a mating call ().

the frog as a signal for sexual intercourse emits a certain cry to the female, like a lover singing a serenade, and this cry is called its croak, so they say. And when it attracts the female to itself they wait for the night. They cannot copulate under water, and they shun mutual embraces on land in the daytime. But when night descends they emerge with complete fearlessness and take their pleasure of one another.

In Aristophanes’ Frogs their incessant croaking is a sign of their demonic origins.

In Aesop’s Fables Frogs embody the worst failings of humans. In King Block they are weak and fearful, whilst they can also be vain and malicious as in The Mouse, The Frog and The Hawk.

Yet frogs are also connected with mother goddess figures like Artemis. They symbolise fecundity and plenty. 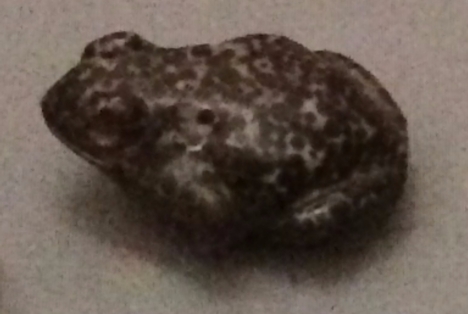 It is perhaps in Egypt that the frog gets this symbolism. The French scholar Leclant said that the frog was a Cthnonian animal, which appeared to rise spontaneously from the marshy waters, much like the sun in Egyptian mythology.

Cthnonian means underworld and has links with ideas of the afterlife. This idea of the sun rising from the land of the dead is central to the Isis religion, where Horus (the sun) is literally born from Isis by the dead Osiris.

In Egypt, the frog was the animal of Heqat a goddess of fertility. Imagery of frogs goes back as far as the first artistic period (Naqada I).  Frogs were popular as subjects for lamps and on Nilotic landscapes.

The most famous example of frogs in the Bible is of course the second of the ten plagues of Egypt.

And the LORD spake unto Moses, Go unto Pharaoh, and say unto him, Thus saith the LORD, Let my people go, that they may serve me. And if thou refuse to let them go, behold, I will smite all thy borders with frogs: And the river shall bring forth frogs abundantly, which shall go up and come into thine house, and into thy bedchamber, and upon thy bed, and into the house of thy servants, and upon thy people, and into thine ovens, and into thy kneadingtroughs

The other notable scene with a frog is in the Book of Revelation:

Early Christianity drew on wide traditions for its symbolism in a very complicated system of cultural borrowings and development. One frog lamp, from Egypt, even contains an inscription in Greek which states simply “I am the Resurrection”, a line also found in John 11:25. Is this a Christian lamp using traditional Egyptian religion’s symbolic understanding of the frog or is it a traditional Egyptian religious image of a frog using similar text?

An apocryphal  medieval tale tells how a frog comforted the Virgin Mary as she grieved the death of her son. The frog told her that she has lost several children. There is something absurd about this tale, but also believable (although not literally) in its portrayal of the unnaturalness and depth of maternal grief.

The frogs connections with fertility continued with associations between the frog and the womb. Several ex-voto frogs were dedicated in Christian churches in Europe, especially in the Balkans.

The frog is a very common animal, but also mysterious. An amphibian, we can only really know half of its life. Perhaps this is why it has drew such a wealth of symbolic meaning around it. 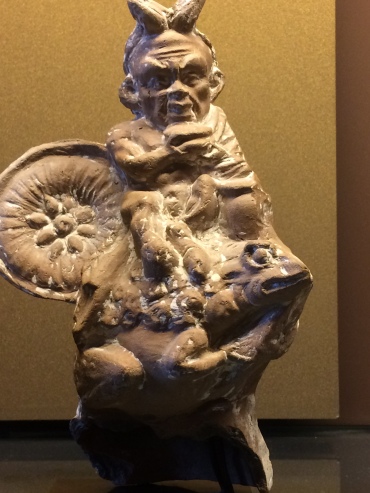