Descending into a dark, smoky room surrounded by Latin chanting, he can’t see who is in the room. The scent of incense is heady and the worshipper feels closer to his god. The ceremonies finish and food and drink are bought out, candles are lit and he eats in communion with the bull slayer. Perhaps once the serious business is done he can’t finally see who has made this meeting. He can arrange business deals or discuss military matters with his comrades.

Rather than a reopening, this is in many ways a revival. The Roman temple of Mithras, in London, was discovered in 1952 following the rebuilding of a bomb site in the City of London. On the site were found statues of Mithras and Serapis (the spouse of Isis), which are on display in the Museum of London. During this period it was a popular tourist site and thousands of people queued up to see the remains. In 1962 however, the remains were removed to a site over 100 meters away. This new site, below the European headquarters of Bloomberg, sees the temple removed back roughly to its original site. The London Mithraeum has experienced a checkered post-discovery history.

Bloomberg are obviously proud of the temple and the archeological artefacts that were uncovered on the site. Bloomberg Space is not just dedicated to the Mithraeum but also will exhibit modern art works. When I visited Isabel Nolan’s powerful tapestry Another View From Nowhen took up much of the entrance space. It’s worth seeing in its own right.

Visitors are given an iPad on arrival and shown to a wall of everyday artefacts from Roman London which survived in stunning condition. These include ceramics, leather sandals and one of the already famous Bloomberg tablets. The overall effect was similar to Jasper Morrison’s This Hard Life but the iPads meant that visitors could zoom into individual objects and found out more. When combined with small crowds due to an advanced booking system (free), this is museum UX the way it should be done. Although it must be said, it is hard to see if this approach will continue once the initial excitement has died done.

Visitors literally descend down to the temple remains. As you walk down two sets of stairs, line drawings indicate the layers of history you pass. A small exhibition room lies just before the temple remains proper. Voice overs of academics and Joanna Lumley contextualise the cult, whilst a light show plays overhead. It is very well done, resembling a futuristic In Our Time. 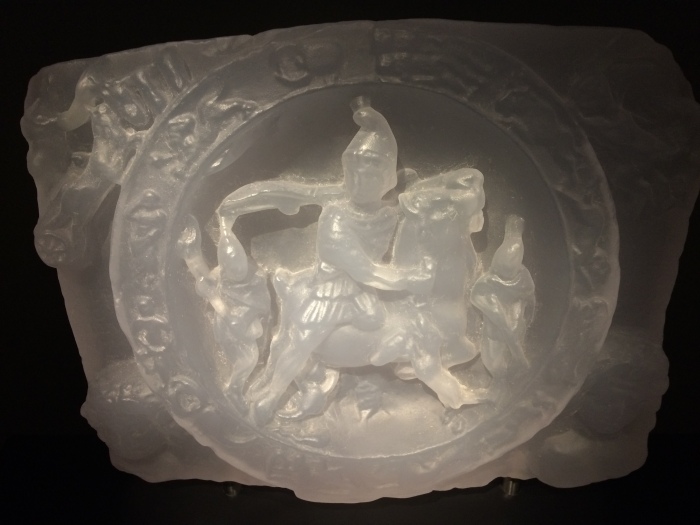 At certain pre-advertised times you are told the show is about to begin. You push through two sets of heavy, black curtains to enter the room with the temple remains. The room is dark and covered in smoke and light atmospherically. From hidden speakers, chanting surrounds you. Then the sound of changing is following by drinking and the sound of pots clashing into each other. It is very dramatic. The lights turn on and you can view the temple remains.

A fairly large building, it is long and thin. The focus would have been the iconographical representation of the bull slaying scene (replicated across the Roman Empire). Along the sides are stone benches. This scene is surrounded by an apse, very similar to churches. Around the outside you can see the curved Roman brick. You get a sense of how the building may have looked and how it may have been used. 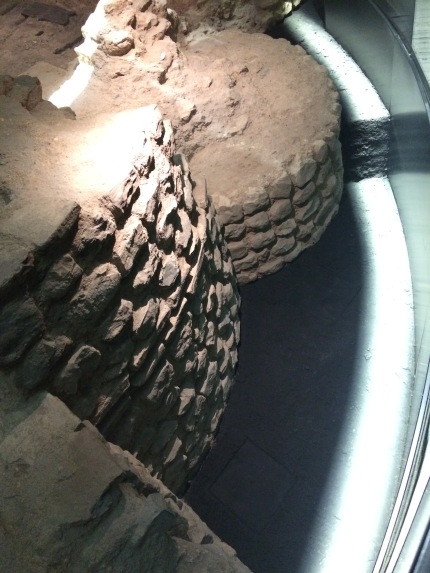 All this is brilliantly done but as the exhibition states, little is known about the cult of Mithras. The main sources of evidence are iconographical (especially the central image of the taucracy) and hostile Christian authors.

Mithras may come from the East. The oldest text to contain his name was found in the Hittite Capital Hattusa. Most authors think Mithraism is a largely Roman religion with influences from the East. It is worth pointing out that although several sites have been found, most cluster on the Northern borders of the Empire or in trade centres. Not many have been found in the Eastern provinces. Evidence of the popularity of the cult in this area however, can be attested in the theophoric names of notables such as Mithridates VI Eupator. The cult received some support from emperors. The first to be named an initiate was Commodus. The large number of attested sites on the Northern borders, have always been seen as an indication of its influence on soldiers. 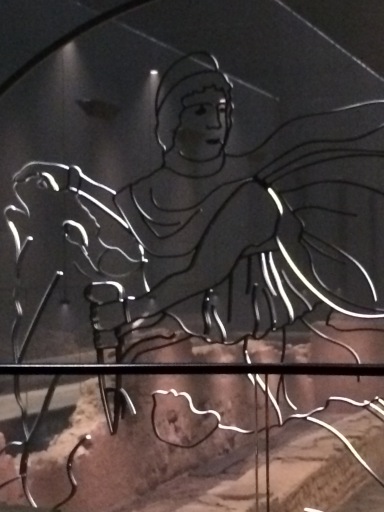 It is clear that symbolism was important to the cult. The central image of the bull slaying is replicated almost identically across the Roman Empire, differing only in styles and medium. From the Phrygian cap worn by Mithras, to the animals who lap the blood of the slain bull and the two torch bearers who stand either stand of the image. Each item is found in almost all images. Turcan writes “From the frontier of the Euphrates in Syria to the North of England [on Hadrian’s Wall], Mithraic iconography is stable, fixed and consistent”. [Pg. 72]

Astrology may lie behind some of this symbolism. There may have been seven hierarchies of worshippers, each of which had a guiding planet. The constellations feature in several friezes, as does the solar god. Yet much of this symbolism remains obscure to us together.

Overall the London Mithraeum is brilliantly done and absolutely worth a visit. If you are arriving in London from elsewhere, I would also recommend visiting the London amphitheatre (below the Guildhall) and the Museum of London. Book now.