A masterpiece of Ancient Art, the story of the Parthenon Marbles still resonate today.

The Parthenon was built between 447 and 439 BCE in the Ionic style on the highest hill of Athens called the Acropolis or upper city. The Athenian Acropolis also contained several other religious buildings including the Erechtheum. Ictinus and Callicrates are identified as the architects for the building.

Sculpture of the Ancient Parthenon

The Parthenon marbles are sculpture that was carved as integral parts of the Parthenon building. Originally these sculptures would all have been painted.Indeed, the paint may have survived up to Elgin’s time when some was destroyed in moulding for casts.

The Greek sculptor Phidias is commonly identified as the artistic overseer of the Parthenon sculpture, although there were different stone carvers.

There are three main sets: the pediments, the metopes and the frieze:

These are the two triangular sections at the front and back of the temple. The Eastern Pediment being above the entrance is the most important. It shows the birth of Athena. The Western end showed the struggle between Athena and Poseidon for control of Athens. Although they could only be seen from one side, the sculptures here were carved in the round. This means that the backs are as fully realized as the front. Of these sculptures, little remains, but what remains suggested art of immense power. The famous horse of Selene the moon god is depicted as exhausted and straining as it dips beneath the horizon.

They are currently kept by the British Museum.

The British Museum currently holds a large selection of the metopes showing the battle of the Lapiths against the centaurs (centauromachy).

The frieze is an immense undertaking. Measuring in height just over three feet, it stretches for 524 feet in a continuous single image. It likely depicts the procession of the panathenia, the central religious festival of Athens. The image has a continuous spatial and temporal flow and shows different stages of the procession which culminates in the moment just before the central act. Part of this flow comes from the movement of the people depicted especially through the fluttering cloaks and horses on show. Indeed, horsemen take up nearly half (46%) of the entire frieze.

The frieze begins in the South West Corner and has two sides. A shorter series on the Southern side and a longer series on the Western and Northern sides. It culminates above the entrance in the Eastern side. This had implications for how the Frieze was viewed in antiquity. The viewer approached it from the back. She walked from the South West corner and would have first walked along the Western end and then the Northern end to approach the Eastern front end.

The frieze was an artistic innovation both in style and topic. It was the first and only (surviving) Greek temple adorned with a representation of a religious ceremony.

In antiquity the statue of Athena Parthenos within the Parthenon was more famous. It was housed in the larger room facing towards the East. Greek temples were designed for gods, not designed for worshippers.

It has not survived into the modern period, although small copies made in antiquity have.

The history of the Parthenon since ancient days

During the early medieval period the Parthenon was turned into a church. This meant some changes to the building as churches were oriented towards the East and were used to house congregations. The two chambers were opened into one. The Eastern door was turned into an apse (the rounded section at the back near to the altar). Windows were also placed into the temple causing some additional damage to the frieze on the Southern and Northern sides.

The church largely survived in this state until 1209 when Athens was taken over by Western crusaders, who turned the Greek Byzantine church into a Catholic church called Our Lady of Athens. This did not cause major changes to the building, although a tower was built on the Western side external to the building.

Following the takeover of Greece by the Ottoman empire, the church of the Parthenon was turned into a mosque. The acropolis itself became a fortress. There were only minor alterations to the building. During all this period, the Parthenon survived largely as intact and in continuous use as a religious building of civic importance.

In 1647, during a siege of the city, Venetian forces fired on the Parthenon and destroyed it. The Ottoman forces defending Athens hid their gunpowder magazine in the Parthenon. They believed that the Venetians would be unlikely to fire on the temple. A deserter revealed this secret to the Venetians and they trained their guns. On 19th September, a cannon ball smashed through the roof and set off the gunpowder stored within. The explosion destroyed much of the temple and the Turks surrendered before regaining control of the city shortly afterwards.

Lord Elgin’s sequestion of the marbles

In 1802 Thomas Bruce, Seventh Earl of Elgin and the British ambassador to the Ottoman Empire received a firman, or authorization from the Sultan in Istanbul, allowing him to take away pieces of sculpture from the Parthenon. The actual meaning of this authorisation remains unclear, even if Elgin’s agents acted with the knowledge of the local Ottoman governor in Athens. In 1816  Elgin’s main agent told the UK parliament that he knew he was exceeding the Firman.

Elgin had hoped to inspire British arts and crafts, originally with drawings and casts of Greek sculpture. Following a slow return to England (which rivalled Odyssey’s homecoming) he organised a series of displays of the marbles in London for members of the public, including artist notables. In 1816, he sold the marbles to the British state for £35,000.

Afterlife of the Marbles

Even in antiquity the frieze had an artistic impact: a replica of a block has been found in the Emperor Hadrian’s eclectic palace at Tivoli.

In London following Elgin’s display two notable examples are the outside frieze on the Athenaeum Clubhouse in London, designed by Decimus Burton and John Henning, which depicts the frieze across the outside of the building.

The Parthenon and acropolis can be seen directly referenced in St Pancras New Church in London, which borrowed elements of the Caryatid porch, and the incomplete National Monument of Scotland in Edinburgh. 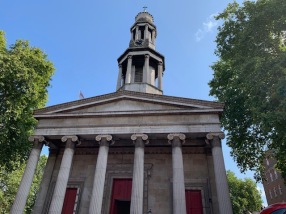