The Suez Canal is one of the world’s major waterways. In 2008, its busiest year 21,415 ships crossed through the canal causing a total of 1 billion tonnes a year. Institut du Monde Arabe is hosting an exhibition celebrating this great achievement.

Suez in the ancient world

What most people might not know is that the Suez Canal began life in the ancient world. Various pharaohs attempted to unite the Red Sea with the Nile River and Mediterranean. The first possibly successful attempt to join the two waters was under Darius I of Persia. The Persian Empire was highly organised and efficient, especially with regards to its communications network. It had a highly efficient postal system. Ptolemy II restored this waterway and it may have been used during the Roman period when trade with Southern India was a going concern. Not much is known about this period of the canal’s history, and only shadowy references to the waterway exist.

Of course to call these canals the Suez Canal is a kind of misnomer, but they followed the spirit and intentions of the original canal and were likely in a similar region. The canal has always been developed within the context of empires.

This stage of the exhibition is covered by a few choice artefacts from the Louvre depicting the rulers. It’s a shame that more wasn’t done to examine what may have travelled on these canals, what boats used or who the people were who lived by the canals.

Suez in the modern world.

The exhibition is at its greatest in the modern period. It places the development of the canal in the colonial context following Napoleon’s invasion of Egypt. Several Europeans attempted to build the canal during this period including the Saint-Simonians, an atheistic and socialistic sect of earnest French intellectuals. But it was Ferdinand de Lesseps (close to power having taught the future pasha how to ride), who was the one given the go ahead.

The Suez was built by corvee labour until 1864 when Napoleon III bowed to international pressure. This is one year after the Emancipation Proclamation. A compensation was paid to the company for the loss of labour by the Egyptian government. The exhibition shows scenes from the Egyptian film Shafiqa wa Metwali which reveals the deep cultural remembrance of corvee labour.

The Europeans liked to think they were more civilised than the Ancient Egyptians. 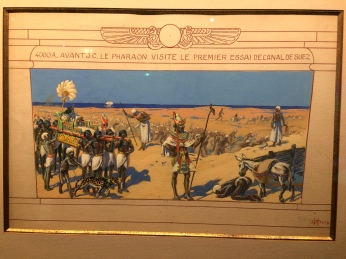 The show is full of objects revealing both the building of the canal and the artistic inspirations provided by it. The very first room plays the theme from Verdi’s Aida. Much of the art and associated architecture contained ancient Egyptian iconography, but not all. Hippolyte Arnoux was a photographer who rejected the orietanlising gaze and began recording the modernity of the canal project.

The canal is of utmost political importance. It was affected by the Second World War. Although it was supposedly international and neutral but essentially under British control. It linked Britain to India and along with Gibraltar, gave Britain control over the Mediterranean. The war changed this geopolitical balance. At the close of the war, the Canal hosted the meeting between FDR and AL Said on the USS Quincy just after Yalta. At this meeting the US pledged to be allies to Saudi Arabia in return for access to Saudi petroleum supplies. This become the central strategic partnership of the post war period.

The canal continued to be in British and French control until the 50s when Egypt nationalised following similar models like Britain’s nationalisation of the railways. Britain was irate. Along with France and Israel it launched a war against Egypt to retake the canals. This was a bloody conflict, which could have been even more bloody. President Eisenhower demanded that Britain, France and Israel withdraw and the canals remained under Egyptian autonomy.

The Suez Crisis was followed by the Six Days War in 1967 and the Yom Kippur War of 1973, events as complex as they were short. The fact that these events are little known in Britain indicates that they are often not taught in schools.

The canal continues to be of utmost political importance, not least by the development of a controversial second canal. The exhibition never quite unpicks this contensious issue with the same honesty that it examines earlier conflicts. 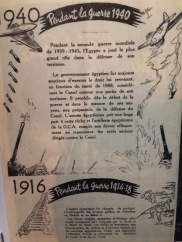 The show is a refreshing combination of various artefacts and medium including reprinted newspapers, sounds and videos and models. A highly interesting show that takes a long view of a particular location, more could’ve been done to examine the lived experiences of the local inhabitants. Nevertheless a 4 star show. See it whole you can.