The Museum of London Docklands are exhibiting several skeletons dating from this period.

Human remains have always fascinated us. John Stow reported on urnes found in Spitalfields in the Elizabethan period. Sir Thomas Browne was inspired by urnes found in Norfolk to write Hydriotaphia, a masterpiece of English literature. Urnes were found during the building of the Express Building on Fleet Street and more recently in 2017, a skeleton was found in 2017 at Harper Road.

In keeping with Roman law, the cemeteries of Londinium were outside the walls, along the main road ways. These cemeteries could be quite ornate and crowded places, but sometimes dangerous. The lair of bandits and outsiders.

There were two main ways of interring the dead. Cremation, an expensive and showy method was used mostly by the elite and inhumation, which tended to be used by the less rich.

The cremated bones of the rich would be placed in urnes. These could be precious metals, clay or even translucent glass. Inhumated remains could be placed in wooden or lead coffins, tile cysts or even in the ground. The exhibition contains two coffins: one wooden and a lead one, decorated with shell patterns.

Some graves would contain goods including jewellery, figurines and bits of food.

What do remains tell us?

The exhibition at the Museum of London Docklands is very much based on death. Yet it is often the lives of these inhabitants that interest us. Behind every burial there would be the grieving friends and family, dealing with both the loss and the financial costs.

The skeletons can tell us much about life in the Roman Empire. London was a cosmopolitan city: one of the skeletons is from the Southern Mediterranean background (based on DNA), another may be from a Germanic background (based on evidence of grave goods). We also learn a little about the diseases and diets of its inhabitants. Roman Londoners of all ages enjoyed Thames seafood and cereals, but only began eating meat as adults.

Yet the focus of the exhibition is not on the living, but the dead.

Death cuts though our lives, but behind every one of these skeletons there was a life lived hopefully with some joy and happiness, but perhaps its own fair share sorrow. It is hard to truly place ourselves in the shoes of a people so distant and understand their lives from the inside, but we can at least empathise with them.

Children and animals in Roman London

Sadly details of this life can be glimpsed but only briefly. For example, infants of less than 6 months were buried around the house (sometimes in the floorboards or by the hearth). The exhibition outlines various arguments about why Romans did this and then poses this question which most visitors would not be qualified to even began answering, myself included. It makes the difference between our two cultures very real.

Another interesting is the combination of meanings that animals had in the Roman world. Several graves contain animal remains, yet one grave contains a small Skelton of a dog with a collar. Was this animal a pet?

Religion plays a large part in the lives and death rituals of many inhabitants. Funerals are often traditional affairs and cultural acts are replicated across distances of time and space. Lamps were placed in graves in North Western provinces of the empire.

The exhibition displays eight lamps. Four of the lamps are plain, one displays a gladiator scene and three show the Egyptian god Anubis. The three Anubis lamps, look like they were produced from the same stamp.

Anubis was honoured across the Roman Empire as a guide to the dead (or psychopomp) alongside Isis. Egypt was famous in Roman times for its animal gods and yet Anubis is the only god regularly portrayed outside of Egypt. He is not as common as Isis, Serapis and Horus (all portrayed as human) but he was still a presence.

On the lamps, Anubis holds a staff and his right hand is risen in salute. This is similar to imagery of Hermanubis, the combination of Hermes and Anubis, popular in Roman times. Hermanubis was venerated as a psychopomp.

From the evidence of the lamps can we say that Anubis was popular in Roman London, and if so, why? Three lamps out of eight, does suggest a noticeable presence of some sort. It could be perhaps his connections to the passage of death, or that there were an association of Anubiacs (known elsewhere) or perhaps a job lot of lamps being sold cheap. It is interesting question that needs examining in more detail. 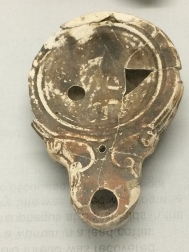 Ultimately, however good the show is, how much is really added to our understanding by exhibiting the skeletons? The truly interesting part of the exhibitions are the stories behind the bodies. We may not be able reconstruct their lives, but we can begin to approach an understanding of Roman London that is complex, multi-leveled and ambitious. Although we may not respect the world of the Romans, we should, I think, respect their dead.

[…] London was a sizeable town for the province of Britannia with around 10,000 – 30,000 inhabitants at its peak. This is small compared to other major cities of the time like Rome or Alexandria. The Roman city […]

[…] A brutalist fortress a short distance from St Pauls, the Museum of London tells the story of London and the people who have lived “here” before the City was even founded. Focusing on social history and lived experiences, the museum contains several immersive experiences including a psychedelic trip to Vauxhall Pleasure Gardens. There is also a museum in the Docklands which in 2018 exhibited Roman Dead. […]