London’s Mecklenberg Square feels like the back end of nowhere. Ten minutes walk from the Coal Drops Yard Google campus and at the edges of Bloomsbury, the spiritual centre of London’s intellectual life, it is today a place you might walk through to get elsewhere. Somehow on the margins and at the centre of things.

DH Lawrence called it the “dark, bristling heart of London”.

Square Haunting by Francesca Wade is a group biography of five women who lived in the Square at important points of their lives. The women are Jane Harrison, H.D., Virginia Woolf, Eileen Power and Dorothy L Sayers.

Jane Harrison is perhaps the most famous of these women, at least to readers of this blog. A brilliant woman with a knowledge of about sixteen languages and a notable classicist, she is still one a major figure in the study of Greek religion and mythology.

As a woman in the late Victorian period, she was kept on the boundaries of academic classicism, a still stuffy world of privilege, prejudice and snobbery.

She supported herself through public lecturing across Britain, before joining Newnham College at Cambridge in 1898. Newnham was a women only college without degree awarding powers until 1948. They got close in 1921, when a vote to award women degrees was narrowly defeated. In celebration of this defeat male undergraduates (many of whom may have been demobbed soldiers like the Freikorp in German) attacked the college, attempting to smash down the gates with a battering ram. Often described as  student highjinks, albeit questionable ones, these were the actions of a class in retreat.

It is perhaps due to these grim events that Jane left Cambridge in 1922. She moved to Paris for a bit before moving to 22 Mecklenburgh Square. In her final years, she lived with Hope Mirrlees, a poet and classicist. They translated Russian literature and supported emigres (following the Russian Revolution). The nature of their relationship is ambiguous, but the depth of their love comes through strong in Wade’s book.

Wade’s short biography reappraises the last year’s of Harrison’s life. It is a revelation.

H.D. is another major figure of modernist literature. She lived in the square just after moving to Britain from the US. She was friends with the poet Ezra Pound, who was a bit of a networker and the hub of London Bohemia at the time. He signed for H.D.’s reader pass for the British Library. He also gave her her name and created a poetical movement around it. It was a label that H.D. recoiled against throughout her life.

H.D fell in love with and then married Richard Aldington. They lived together in a one room apartment in the Square. Aldington soon fell in love with Arabella, the partner of his friend John Cournos, who lived in the flat upstairs.

H.D. was unlucky in knowing brittle men with some literary ability. She is portrayed in various minor works of fiction. The best of these is Death of a Hero, by Richard Aldington, published in 1929. He called it a “jazz novel”. Lawrence Durrell called it “the best war novel of the epoch”. It is one of the most bitter novels ever written: a tale of fractured male ego, a bitter story of an essentially good man who is mistreated by two bad women. The Great War is almost circumstance to the internal torment and the aggressive war of the genders. It’s little read today.

DH Lawrence also knew the couple during their time in Mecklenberg Square. He based scenes from Aaron’s Rod on the fractured living conditions without understanding fully what was going on.

John Cournos portrayed H.D. in Miranda Masters published in 1926. He used many of her letters to him in the novel. The reviewer at the Spectator said the character Miranda was “one of the most unpleasant abnormal of women, even in current fiction”.  H.D. herself said “a most unseemly book about ME I think… a fool and an incompetent and suppressed nymphomaniac”.

H.D. was no fool. She went on to report her side of her time in the square in a series of brilliant semi-autobiographic novels which took apart these man with a scalpel. Richard Aldington wrote of Bid Me to Live:

It’s awfully good […] authentic and concentrated, better than the equivalent chapters in Aaron’s Rod where Lorenzo was in one of his fits and guying us all … It seems to me just as well written as Virginia Woolf, Michael more interesting and “human” and truly poetical.

John Cournos was furious when he read it.

A classicist, H.D. returned again and again to the ancient world and classical themes to explore ideas of gender, creativity and sexuality. She deserves wider recognition. Her masterpiece is perhaps Trilogy written during the London Blitz of 1940.

Each of these women faced the challenges and restraint of the patriarchal society of the time in different ways. Colonialism and white privilege formed the background to many of the trajectories of these important women, yet this is never really investigated by Wade. London was the rich centre of a major Empire built on exploitation and colonial violence. That is not to say these five women were in any ways responsible for this. Indeed they would each be considered anti-colonial after a fashion and in their own ways. Powers, a socialist the most obvious, but even Woolf who was from a family of colonial administrators was critical of the trappings of empire.

However a book which aims to explore the time period in question, should really take some time to engage with the wider issues and explore how this impacts on individuals both in their responses to this and also the routes open to them.

By doing this, we can recognise that progressive individuals in the past can be involved in repressive politics, sometimes even without recognising it. By recognising this in a work of history we begin to identify the ways that privilege and oppression intersect within our own lives and can begin to use this knowledge to challenge it.

This book is a brilliant exploration of women writers at an important moment of change. Wade does a brilliant job at communicating these lives. You feel like you know these writers. You sympathise with them, without feeling like you only hear their side of the story. A well written and exciting book and highly recommended to everyone, you finish it with several extra books on your to reading list. 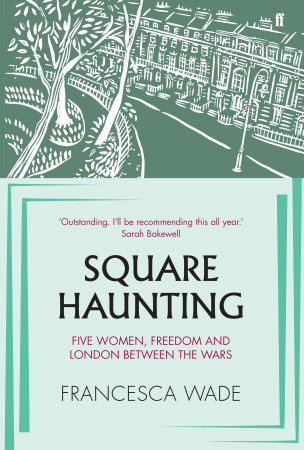 Square Haunting by Francesca Wade is published by Faber & Faber.